I’m pretty sure most of you already know about Terraform, an amazing tool from Hashicorp (owners of Vagrant, Packer, Consul and others), which allow us to build infrastructure from the code. Oh, yes!

Terraform has a lot of great features: declarative syntax based in json, keep the state of all the resources, easy to apply changes to our infrastructure, plugins easy to use and develop, aggregate and reuse code with modules, etc, etc, etc …

However, it is still a quite young project, 0.6.16 at the time of writing this document, and despite they release new versions very often ( the new version 0.7 is around the corner ) IMO the development team looks like more focus in adding more and more providers rather than creating some features or fix core some bugs. We only need to be patient and wait :)

But for those of you that are cutting edge guys I have here some tips I found really useful using terraform in my infrastructures.

No matter the language you want to use: bash, ruby, python or the ancient make ;-) , write a wrapper that will help you to run terraform exactly in the way you want to use it, specially in work environments with big teams. You will make your sysadmin life easier.

Define dependencies in your wrapper, for example: run plan before apply to avoid applies without plans! ( sounds silly but I saw environments fully destroyed because of that! :D ), configure remote states before plan, ask for double confirmation before destroy, test the terraform version allowed to use, run rspecs after apply, etc.

For extra security play with your sudoers config and change the PATH environment variable to avoid the use of the terraform binary, forcing users to use the wrapper.

The number of resources you can create with terraform is growing more and more, that makes the terraform.tfstate files potentially very big, making the apply slow and the changes more risky. Because of that, organise properly your terraform code is mission critical.

Create a directory tree that fits with your own infrastructure or organizational schema. Is quite common to have multiple environments like development, preview or production ( I would say this is mandatory nowadays! ) and multiples geographical regions ( could be AWS regions or not ).

Also, split your terraform code in several files: variables.tf, main.tf and outputs.tf at least and keep your modules in its own directory.

This will help you to maintain complex infrastructures with multiples environment, regions, partners, services, etc. and reduce the probability of blowing up all your servers by mistake \o/ .

Use terraform.tfvars and build it automatically

If you are using AWS, use allowed_account_ids in the your AWS provider to avoid applies in wrong AWS accounts.

Ruby script to build terraform.tfvars, I run it automatically from my make file before any plan or apply.

If you are using AWS you can get benefit from the Named Profiles matching the subdirectories under the account directory with the Named Profiles. Your script could use the AWS_PROFILE environment variable to build a proper terraform.tfvars automatically.

Sometimes you would find out that you have to deal with the terraform.tfstate file manually, you will have to delete, add or modify some resources or values.

This usually happens to me when I upgraded terraform, sometimes the resource config change and force me to destroy the resource and create a new one, if I can’t do it ( or just I don’t want to do it because $reasons ) I have to modify the state manually. Also could happens when your infrastructure provider ( AWS for me ) change a default value or when you just want to add a resource that already exists to terraform.

So, because of that, the smaller the terraform state the better. Use the directory tree to split your terraform code in small pieces.

Btw, terraform is dealing better and better with this corner cases, even in the new Terraform 0.7 there is a CLI tool to help with the state.

If you followed the previous advise now you will ask: What about the outputs? How could I reuse resources that has been defined in other terraform states?

Terraform Remote State is the answer.

Configure all your terraform states to be uploaded to S3 buckets ( with versioning enabled! ), you should do this automatically with your wrapper according to your tree directory.

Add the values you want to “return” in you outputs.tf file.

Then add to your main.tf the terraform remote states and use the output properly

Don’t worry if you forget some output, you can add more when you need it, just edit the outputs.tf file and run plan + apply again, the plan will be clean ( I know, it is anoyning! ), but when the apply finish the new output will appear in the terraform state! Magic! Ready to be used in your code!

Keep all your terraform under version control

That’s obvious! What? No? Seriously, use git as soon as possible.

Just a couple of points here:

Use modules, don’t use nested modules

Terraform modules are great, helps us to reuse code and keep a good code organization, but you should keep the modules as simple and reusable as possible and avoid nested modules.

I know that eventually those bugs will be fixed, but it has been a long time since nested modules are having issues, so for now, don’t use nested modules.

With terraform you are building infrastructure from code, so as you do with any code… write tests! In this case, integration tests.

I’ve been using awspec, it’s quite complete, it’s easy to use, it’s enough.

An example with IAM groups and users

Add terraform to your CI tools

With terraform we can not write tests before apply the infrastructure, terraform plan try to do this and sometimes fails ( quite common to have a succesful plan and after that the apply fails! ). However, we can run integration tests after the apply to ensure everything has been created properly, it is worth you leave this to your CI tool ( let’s say Jenkins ).

Also, running terraform integration tests in Jenkins will help you to detect when a resource has been changed manually. 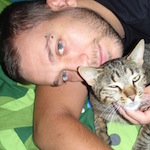